Step 6: Test with Karma and Jasmine

For those unfamiliar with Karma, it is a JavaScript test runner that is test framework agnostic. The fountainjs generator has included test framework Jasmine. When we ran yo fountain-webapp earlier in this codelab the generator scaffolded files with pattern *.spec.js in the source folder of the mytodo folder, created a conf/karma.conf.js file, and pulled in the Node modules for Karma. We’ll be editing a Jasmine script to describe our tests soon but let’s see how we can run tests first.

Let’s go back to the command line and kill our local server using Ctrl+C. There is already a npm script scaffolded out in our package.json for running tests. It can be run as follows:

Every tests should pass.

You’ll find unit tests scaffolded in the src folder, so open up src/app/reducers/todos.spec.js. This is the unit test for your Todos reducer. For example we get focus on the first test who verify the initial state. (Note: on windows, you might need to add 127.0.0.1 localhost to your etc/hosts file)

And replace that test with the following:

Re-running our tests with npm test should see our tests now failing.

If you want run test automatically on change you can use npm run test:auto instead.

Replace the initial state by:

Fantastic, you have fixed the test: 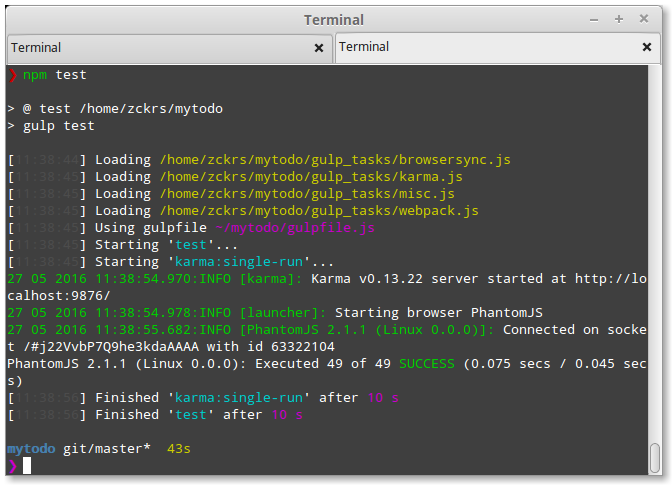 Writing unit tests make it easier to catch bugs as your app gets bigger and when more developers join your team. The scaffolding feature of Yeoman makes writing unit tests easier so no excuse for not writing your own tests! ;)

« Return to overview or Go to the next step »