What's new in the Backbone generator

Before, the scaffold generated the project’s application files into the app folder. Now you can customize it using the --appPath option.

This will create a folder named public instead of app. It will then put the scaffolded code into that folder. When you use a sub-generator, like backbone:model, the scaffold will use the public directory. 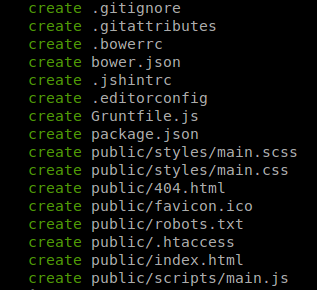 We have written a new generator named generator-backbone-mocha. This will generate Mocha tests for your Backbone app. When you create new model with yo backbone:model todo, this will create todo.spec.js in your test folder.

You can choose BDD/TDD when generating the new Backbone app with the --ui option.

By default the generator is setup to use BDD with Mocha.

Another great addition to the Backbone generator (version 2.0), is CoffeeScript support for RequireJS. A lot of people have requested this and we are happy to announce support for it. Thanks to @stephanebachelier for the effort in getting this in.

The last change we want to announce relates to Bootstrap. We have upgraded to Bootstrap 3.0! Now by default, Yeoman will install Bootstrap 3.0 when you generate a new application. Don’t fear though, projects can include Bootstrap 2.0 still. After project generation, edit the bower.json file and change the version of (sass-)bootstrap required.

We hope you like the new additions and enhancements we have made on the Backbone generator. We are looking for your feedback on keeping this project awesome.